Orlando in ‘As You Like It’ by William Shakespeare 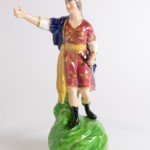 Orlando in ‘As You Like It’ by William Shakespeare

A very unusual and previously unrecorded coloured version of a Dudson figure of Orlando, standing on a green round gilt lined base, his left arm to his side holding a sword, his right raised and gesturing forward, wearing a Roman plumed helmet, long robed dress with waistband, a flowing long scarf across his shoulders and back.

A pastoral comedy by William Shakespeare believed to have been written in 1599 and first published in the First Folio in 1623.

The wicked Duke Frederick takes the title belonging to his brother and sends him into exile. Rosalind, the true Duke’s daughter, remains with Celia who is Frederick’s daughter. They go to a wrestling match and meet Orlando who has also been denied his inheritance. They fall in love, but Frederick now banishes Rosalind because Orlando’s father is an old friend of Fredderick’s brother. Celia goes with Rosalind  to the forest and Orlando also goes to the forest and carves her name on trees and leaves sonnets hanging on bushes. After many trial and tribulations Rosalind and Orlando marry. The Duke, shown the wickedness of his ways, gives back the Dukedom to his brother. Orlando saves his wicked brother from a lioness and they all live happily ever after.