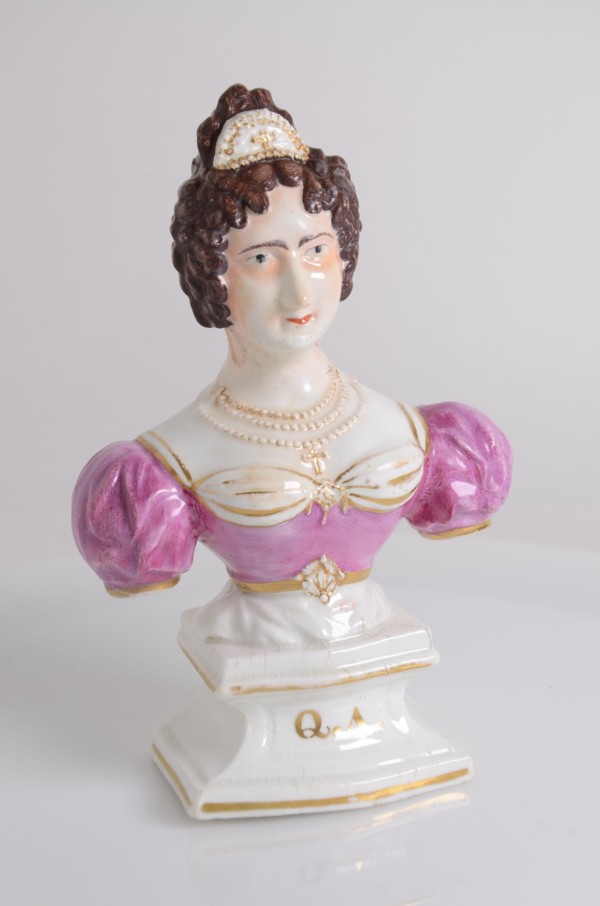 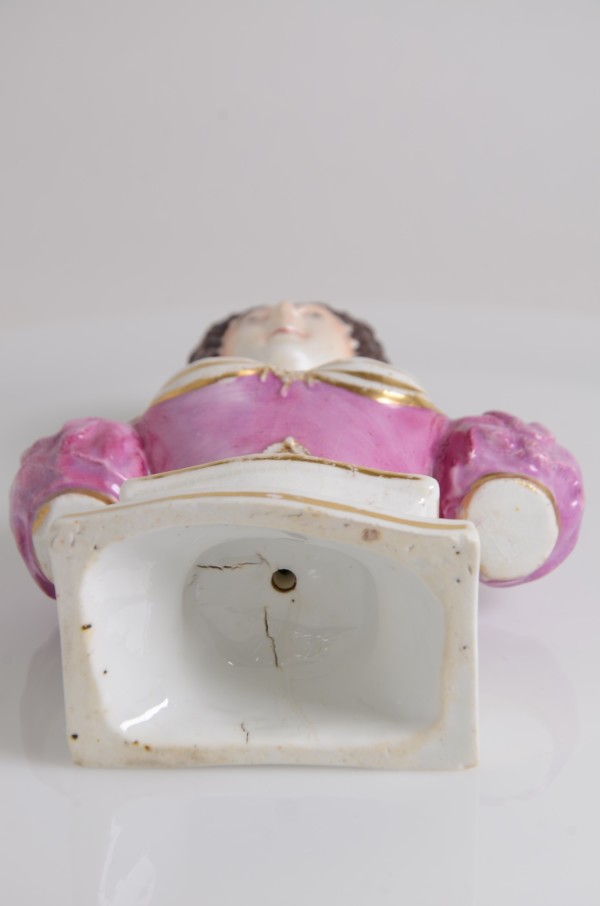 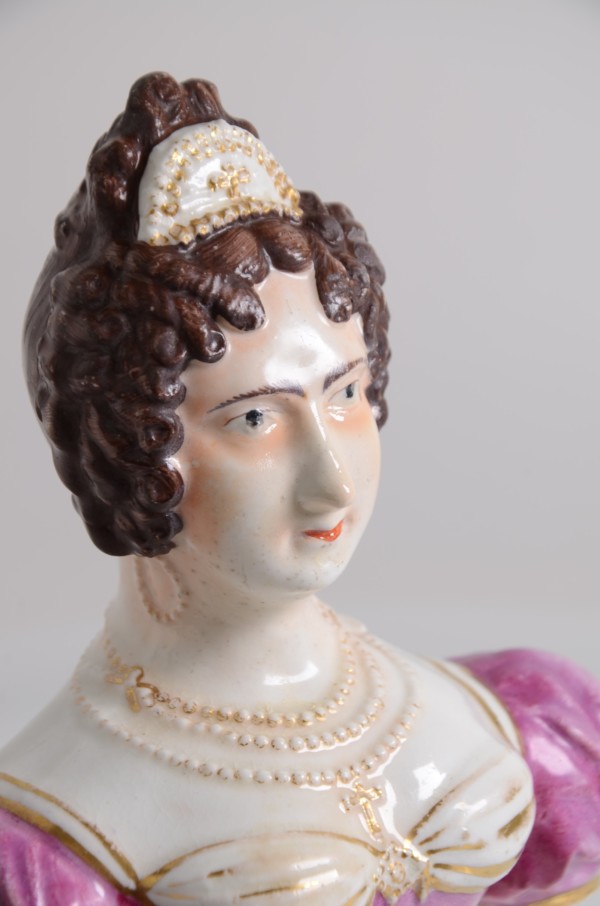 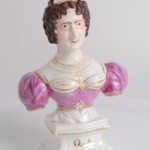 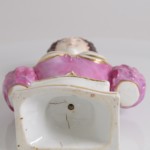 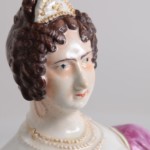 Reference: For a similar figure; Myrna Schkolne, Holding the Past, Page 15, Fig 10

An extraordinarily rare and fine bust of Queen Adelaide, titled with her initials Q.A and dating to c1831 the year both William IV and she were crowned on 8 September 1831 at Westminster Abbey. The bust is after a drawing of Queen Adelaide, circa 1830, engraved for (Bell’s Weekly Messenger)

Adelaide married William in a double wedding with William’s brother, Prince Edward, Duke of Kent, and his bride Victoria, Dowager Princess of Leiningen, on 11 July 1818, at Kew Palace in Surrey, England. They had only met for the first time about a week earlier, on 4 July at Grillon’s Hotel in Bond Street. Neither William nor Adelaide had been married before, and William was twenty-seven years her senior.

Despite these unromantic circumstances, the couple settled amicably in Hanover (where the cost of living was much lower than in England), and by all accounts were devoted to each other throughout their marriage. Adelaide improved William’s behaviour; he drank less, swore less and became more tactful. Observers thought them parsimonious, and their lifestyle simple, even boring. William eventually accepted the reduced increase in his allowance voted by Parliament.

On the Continent, Adelaide became pregnant, but in her seventh month of pregnancy, she caught pleurisy and gave birth prematurely on 27 March 1819 during the illness. Her daughter, Charlotte, lived only a few hours. Another pregnancy in the same year caused William to move the household to England so his future heir would be born on British soil, yet Adelaide miscarried at Calais or Dunkirk during the journey on 5 September 1819. Back in London, they moved into Clarence House, but preferred to stay at Bushy House near Hampton Court where William had already lived with Dorothea Jordan. She became pregnant again, and a second daughter, Elizabeth, was born on 10 December 1820. Elizabeth seemed strong but died less than three months old on 4 March 1821 of “inflammation in the Bowels”. Ultimately, William and Adelaide had no surviving children. Twin boys were stillborn on 8 April 1822, and a possible brief pregnancy may have occurred within the same year.

Princess Victoria of Kent came to be acknowledged as William’s heir presumptive, as Adelaide had no further pregnancies. While there were rumours of pregnancies well into William’s reign (dismissed by the King as “damned stuff”), they seem to have been without basis.

At the time of their marriage, William was not heir-presumptive to the throne, but became so when his brother Frederick, Duke of York, died childless in 1827. Given the small likelihood of his older brothers producing heirs, and William’s relative youth and good health, it had long been considered extremely likely that he would become king in due course. In 1830, on the death of his elder brother, George IV, William acceded to the throne. One of King William’s first acts was to confer the Rangership of Bushy Park (for thirty-three years held by himself) on Queen Adelaide. This act allowed Adelaide to remain at Bushy House for her lifetime.

The King and Adelaide were crowned on 8 September 1831 at Westminster Abbey. Adelaide was deeply religious and took the service very seriously. William despised the ceremony, and acted throughout, it is presumed deliberately, as if he was “a character in a comic opera”, making a mockery of what he thought to be a ridiculous charade.  Adelaide alone among those attending received any praise for her “dignity, repose and characteristic grace”.