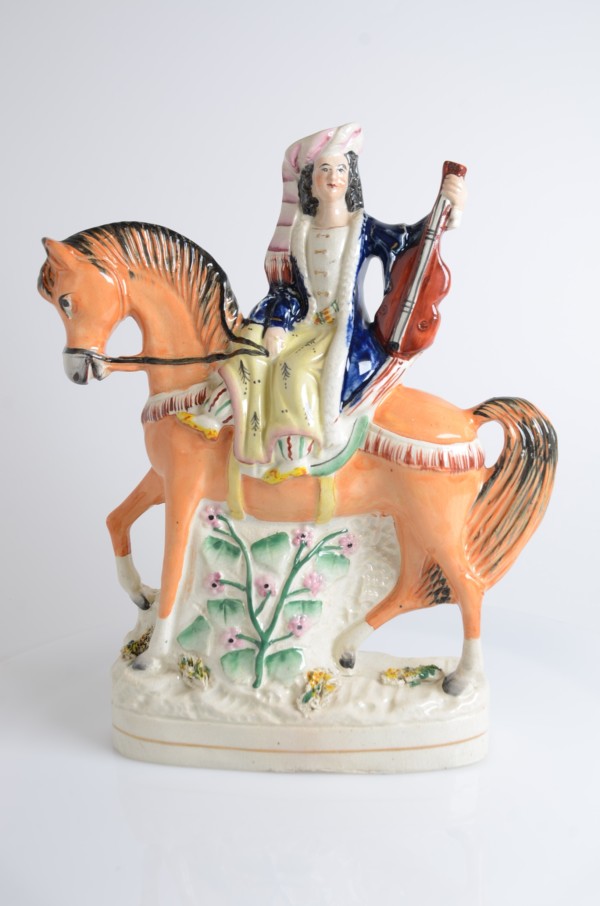 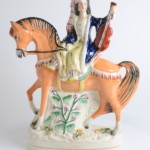 A large equestrian figure of a woman wearing Eastern dress of turban, long fur edged coat, tunic, and skirt with trousers. She is seated on a horse and holds a stringed instrument in her left hand, resting it on the horse’s flank, the other hand holds the reins. A flowering plant grows between the horse’s legs. A superb example, early from the mould, sharp crisp features and well coloured.

One, of a very rare and desirable equestrian pair, it is possible that these figures portray Mandane and Artabanes from the opera Artaxerxes or similar performance at Astley’s Amphitheatre.

Send Enquiry for Mandane on Horseback

An opera by Thomas Augustine (1710-1778), it made its debut in 1762 at Covent Garden, with Charlotte Brent in the role of Mandane and John Beard as Artabanes. It tells the story of Artaxerxes, the son of Xerxes, King of Persia; Artabanes, his general; andMandane, whois the sister Artaxerxes and in love with Arbaces, the son of Artabanes. Mandane and Arbaces must part as her father has banished Arbaces, as he does not agree with the liaison. Meanwhile Artabanes has killed Xerxes and exchanges his sword with Arbaces and bids him escape. Artaxerxes asks Artabanes to find his fathers’ murderer and he kills Darius in a bid to shift the blame, but Arbaces is caught with the murder weapon.

Artabanes then makes it known that he wants Arbaces to take the throne, and wants to help him escape, Arbaces refuses knowing that escape would confirm his guilt. Artabanes then offers the hand of Semira to Rimenes if he assists in a plot to kill Artaxerxes.

Arbaces is in his prison cell and Artaxerxes convinced of his innocence allows him to escape. Artabanes finds his son Arbaces gone and with Rimenes plots to poison Arttaxerxes at the coronation ceremony. Just as Artaxerxes is about to drink the poison, Semira enters and tells him that the palaces surrounded by troops led by Rimenes. He is ready to defend himself when Mandane arrives to tell him that Arbaces had killed Rimenes and quashed the rebellion. Artaxerxes then offers the poisoned cup to Arbaces, but Artabanes strikes it from his son’s lips, admitting his guilt. Atraxeres spares his life but banishes him from the kingdom.