The Ups & Downs of the Extraordinary Mr Falahaa 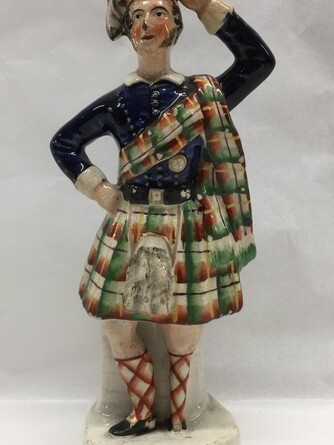 The Ups & Downs of the Extraordinary Mr Falahaa

The Ups & Downs of the Extraordinary Mr Falahaa !!

Some Staffordshire figure collectors may be aware of an unusual lone standing figure illustration tucked into the back pages of the theatrical section of P.D. Gordon Pugh’s fine volume ’Staffordshire Portrait Figures and Allied Subjects of the Victorian Era’.

Pugh gives us a little information about its ownership history and, at the time of the publication of the book, it’s whereabouts.

It had once been in the collection of the late, Lady Lucy Wise, and it would appear the figure was bequeathed to the Laing Art Gallery and Museum, Newcastle upon Tyne, where, to my knowledge it has been located in there store ever since, at the moment, shut away and languishing in the museum’s store, hidden from public view.

In fact, to my knowledge, no other example has ever been recorded. I think we can safely say, if it wasn’t for Mr Pugh’s illustration, none of us would ever have known it exists….

The black and white illustration has always intrigued and fascinated me, as to my eyes, it displays a number of the characteristics I would usually associate with the figures I have chosen to collect over the last 30 years, some may know already, but for those that do not know me, I collect mainly ‘Alpha’ factory/type figures.

The indented gilt capital letters to the base, those typical black pupils on a white ground with the perfectly arched eyebrows, and of course those cupid bow lips, all stand out to me as a candidate for an Alpha attribution. Now with these recently taken colour photographs (Peg leg Illustration 1a & Name Illustration 1b), I am convinced it is an Alpha figure.

Pugh gives us a good description of the figure which is clearly animated and dancing a ‘Highland Fling’. The animation and drama of the figure can almost act as a distraction from the rest of the figure details, which at first glance appears to be just another Scottish dancer adorned in Highland attire including a jacket, kilt, sporran, and tartan scarf. But if you look a little closer you will notice that this dancer has some unusual additions to his costume and demeanour that are important pointers, put there intentionally to emphasise the character the potters wish to portray, a gold medal or pocket watch on his left side is one and most importantly, he is wearing a wooden peg leg with a tartan sock on it!!

The observations in the book go on to detail some vague possible candidates as to whom this figure might portray, sadly, they are all guesses, an unconvincing attempt to identify this curious character from a bygone era.

For 50 more years there has been no further published attempt at his identity or clear and firm evidence found to identify him, no discoveries to point us in the right direction, nothing proved once and for all that determines whether a ‘Mr Falahaa’ was a real person or not, nothing to let us know for sure if he ever existed at all.

All we have is this one, curious, splendid, sole and lonely example.

One thing I have learned about our Staffordshire potters over the years of collecting, they were a frugal bunch in manufacture, they would not have wasted time and effort to make just one figure, it just wouldn’t sit right.  Why would they go to all that production expense for just one example?

This character must have made a huge impression on the potters and public at large, one that inspired our potters so much so that they thought him especially worthy to be immortalised in clay over 170 years ago.

But why have no others ever been found?

I had set myself a challenge!! I had to try harder, turn over every leaf, use every new resource available, dig a little deeper and find out if he was real or not, I had to know who he was and what had happened to halt the mass production run of this figure!!

Well, folks, I have some good news to report!!

I have put in the hours searching, (lockdown weeks have had their advantages) and it’s paid off.

Come a little closer and let me tell you the tale about ’The Ups and Downs of the extraordinary Mr Falahaa!!

The first public appearance of Mr Falahaa was at the Doughty’s Concert Room in Bristol (Illustration 2) on Saturday 18 September 1848. A popular but small concert room attached to and affiliated with a popular Tavern on the Cider-House-Passage just off Broad Street, Bristol. A venue that between 1842 and 1852, put on a variety of concerts and stage acts. These tended to feature a range of singers (comic singers, balladists, sentimental vocalists, etc), along with the occasional dancer, ventriloquist act or tableaux vivant troupe.

An advertisement in, ’The Bristol Mercury and Western Counties Advertiser, for Saturday, September 16, 1848, gave me the first real documented evidence of Mr Falahaa’s actual existence.

The column describes in the line up of that following Monday evening’s entertainment (Illustration 3), and for the first time, gives us a record of a certain; [Mr Falahaa, the only Wooden Leg Dancer in England], was to make his first public stage performance ……..Admission Free!

I was beside myself, I’d found an account of him at last!!

He must have been an instant hit with the public, as just a few weeks later he appeared again, at the same venue (Illustration 4), Saturday 30 September 1848, only this time he is advertised in the Bristol Mercury; [Mr Falahaa being an old soldier, and having lost his leg in defence of his country, is allowed to be the most astonishing Dancer in England].

A picture of a life lived was beginning to emerge, I had a couple of clues, but needed more!!

Our Mr Falahaa was finally real, a self-confessed war hero, battle-scarred and maimed in the defence of the Empire, who through his newfound dancing exploits (and state of the art prosthetic wooden leg!) starts to become a popular act, a new celebrity to the delight of the British public.

A countrywide tour begins, popping up next in the West Country (Illustration 5), a small theatre, possibly on Union Street, Plymouth. This time we have a small but glowing published theatre revue of his performance in; The West of England Conservative, Wednesday, December 13, 1848 [On the evening Mr Falahaa, the wooden leg dancer, who had previously gratified the audiences by his “Highland Fling,” and other dances, took his benefit].

Here he is in full colour for the first time (Illustration 5a), just about to perform his ‘Highland Fling’. (with special thanks to Sarah Richardson, curator of Art, Laing Art Gallery, Newcastle-upon-Tyne, for supplying the colour photographs)